The funeral of Malevitch in 1935 was an artistic, liturgical and solemn event. Laid in the coffin dressed in a white shirt, black trousers and red shoes, the artist has fully planned the suprematist ceremony.

Designed as an aesthetic manifesto, the coffin, built by his faithful disciple the painter Nicolas Souétine, has a shape of superimposed crosses in the style of the architektons, these modules of utopian architectural forms in three dimensions, created by Malevitch as a spatial extension of suprematism to express the infinite character of space.

On the lid of the coffin are painted the three cardinal elements of suprematism: the Black Circle, the Black Cross and the Black Square. Three canonical figures which together became the tomb and the flag of Malevich. 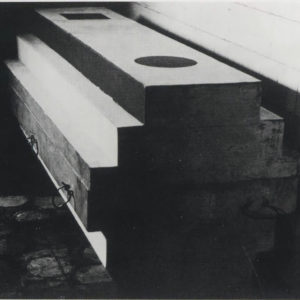 Witnesses at the funeral claim that the painted cross was erased from the coffin by order of the authorities. According to Malevich, the Cross is "the second fundamental suprematist element", the first basic element of its plastic system being the Circle.

As for the Square, it constitutes the absolute referent of the system, that is to say the form zero from which all visual entities are generated. While the Circle originates from the rotation of the Square, the Cross is obtained by dividing the Square into two rectangles, one of which rotates on the other at 90 °.

In 1918, at the funeral of a friend artist, Olga Rozanova, Malevich whispered to sculptor Antoine Pevsner: "We will all be crucified. My cross, I have already prepared it. You must have noticed it in my paintings. "

The Circle, The Cross, the Square are the exact formulas of suprematism. But it is not useless to notice that their declared geometrical rigor is affected by other meanings: the trembling contours of the Circle, the irregularities of the edges of the Square, the tiny inclination of the branches of the Cross and the precariousness of their equilibrium also signify sensitivity, vulnerability, uncertainty.

The supremacy of the Circle, the Cross and the Square does not only form the synthetic testament of Malevich. These are, since 1915, the figures that allow him to build an overcoming and a sublation of painting, which is only "a dead representation evoking something alive". The artist gives, in an manifesto, The Suprematism (1920), his program: "We must build in time and space a system that does not depend on any aesthetic beauty, any aesthetic emotion, any aesthetic state of mind, and that would be rather the philosophical system of color where the new advances of our representations are realized, as knowledge. " 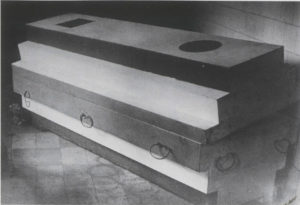 Endeavoring to say the immaterial of perception, the intangible of space, the infinitude of spirit, Malevich took another step with his White Square on a white background (White on White), which he exhibited in 1918. In the catalog of the Xth Moscow State Fair, he thus formulates his discovery of an beyond of painting: "Now, the path of man is through space ... I pierced the blue shade of the limits of color, I penetrated into the white; beside me, comrades pilots, navigate this endless space. The white free sea is spreading before you."