"When I left Japan, I learned two things: to say 'no' and to say  'I'. I authorized myself to become an artist", says Kimiko Yoshida from her all-white apartment in the Bastille district of Paris. Surrounded by a dozen or so of her large square photographs, Kimiko talks about how she came to France in 1995, after winning a competition allowing her to study for a year at the Ecole Nationale Supérieure de la Photographie in Arles. She had already studied photography in Japan for two years but, she says "I was always the ugly little duckling. I was so different from everyone else. The pressure to conform, to fit into a group, was so strong that it became imperative for me to leave. I felt like I would commit suicide otherwise." Which is not to say that France, at first, was all fun and games. "I didn't speak a word of French when I arrived in Arles. I cried every single day. I felt as if the only friend I had there was the mistral, the wind that blows through Provence."

Now, as we sit over lunch with her husband, the art critic and curator Jean-Michel Ribettes, he justifiably boasts about her international notoriety and about her most recent achievement: a hugely successful showing at the Art Paris fair in March 2006 where Kimiko sold 72 pieces, setting a new record for the fair. Even the riot-worn Prime Minister of France, Dominique de Villepin, took time out to buy one of her photographs, The Kayapo Txukahamae Bride.

Kimiko may have learned to say "I" since moving to France, but don't be fooled by the dozens of self-portraits she has produced here. These self-portraits or "still lifes" as she prefers to call them, do not speak of Kimiko, nor of life, but of something else entirely. All modesty, Kimiko tells us in her softly-spoken, hesitating French about the way she perceives her works, and the symbols that lie just below their surface. 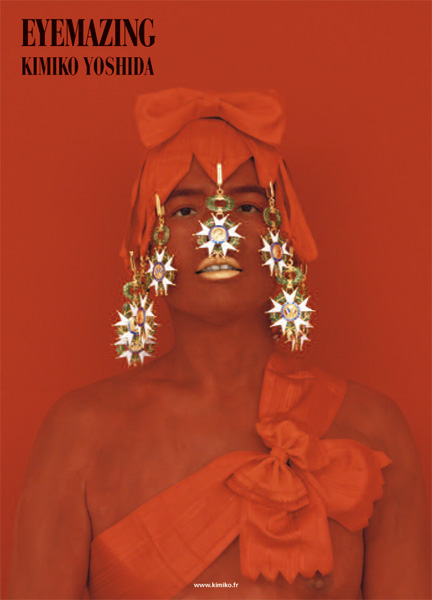 Barbara Oudiz: You say that your self-portraits are not at all what they seem to be. What are they, for you?

K.Y.: With each photograph I create, I am carrying out a ceremony of disappearance. In fact, it is not me that I'm photographing. I'm photographing a corpse. My work speaks of death, but there is no suffering. From a technical point of view, each one is a still life. I use very low indirect lighting - two Tungsten lamps - which are traditionally used in still lifes. This creates an image with very little depth. My self-portrait is a still life. I disappear into the background. There is no search for identity in my work. I know that identity doesn't exist. There are only infinite layers of "me". If I peel them back, like the skin of an onion, there will be nothing underneath. That is why I entitled my exhibition at the Israel Museum in Jerusalem last winter All That's Not Me.

Jean-Michel Ribettes: The origin of all art is funerary art, beginning with the pyramids. Kimiko's minimalist and formal approach actually keep her at a distance from death. There is no Expressionism or pathos in her subjects.

B.O.: What are the aspects of your work that you consider specifically Japanese?

K.Y.: My use of light. I have a typically Japanese sensitivity to the way light arrives and settles on an object. It is the soft, subtle light reminiscent of ancient Japanese painting. There are no shadows, no contrasts, it is extremely flat. In Japan, the doors of a house are made of paper; they let a very soft light enter the house. I obtain an extremely fine palette of colors through this lack of contrast. You must understand that my white is not white. It is a gradation of white composed of thousands of colors.

B.O.: Your choice of a monochromatic palette is probably the most distinctive characteristic of your work. Where does this choice stem from?

K.Y.: My primary reason for using monochromes is to express the infinity of time, timelessness. People are often surprised by the fact that I never use computers or filters to obtain a monochromatic effect. In a traditional color image, you can count the colors, it's overly-talkative. A monochromatic image offers a meditative silence.
But as you move closer to my images, you discover details in them which sprout up from what appears to be a monochromatic, flat surface. That is why I cover my pictures in plexiglass, to capture the reflections of the people and the objects surrounding them.

B.O.: Your use of makeup also contributes to producing monochromatic images and to expressing self-effacement?

K.Y.: Yes, a fundamental part of Japanese culture is linked to the notion of disappearance.
Unlike the West, in Japan we use makeup in order to disappear, to erase our identity. The basic idea behind my makeup is tied to the geisha's traditional use of a ghostly-white makeup, called shironuri which leaves only the outline of her eyes and bright red lips visible. Makeup in Japan is not perceived as a way of making a woman become more beautiful, but rather as a way of transforming her into an abstraction of a woman. She becomes an "idea of a woman", rather than an "ideal woman." It is a way of dying.
I have an excellent memory for color thanks to my past experience in fashion, and am able to find almost the exact same nuance in the cloth I use for the background and in the makeup I put on my face. So I virtually melt into the background.

B.O.: What influences have France or Europe in general brought to your work?

K.Y.: My encounter with European culture was an enormous shock. Jean-Michel initiated me to Baroque art in particular, which had very important repercussions on me personally and on my art. Years ago, he took me to Venice, and we visited thousands of churches. He tried to explain to me the symbols and the aesthetics of Baroque art, but I didn't understand a thing. I was so frustrated that I was crying and extremely upset by the time we left. He later bought me an illustrated Bible for children. I read it in its entirety and when we returned to Venice years later, it was incredible: all of a sudden, I understood everything! I understood that Baroque art was the perfect structure for seduction, but that this saturation of space was something totally opposite from the Zen aesthetics of the Japanese. I knew I would use the influence of Baroque art, and bring it closer to the principles of Zen. This experience led me, in 2001, to create the The Widowed Bride and The Baroque Bride.

B. O.: How does this encounter manifest itself concretely in your work?

K. Y.: I feel I have married the seduction of Baroque art with the idea of substraction in Zen art. My works are between the abstract and the figurative. Rather than the saturation of space which characterizes Baroque art, my minimalist approach expresses the immaterial. It is about absence and self effacement. I am not filling up emptiness, but rather emptying what is full! I use a Hasselbad 6x6 camera to obtain a square format, which symbolizes stability in Zen Buddhism. It is in my exhibitions that I'm the most Baroque: I completely saturate the space by hanging pieces very close to each other.

B.O.: In the work entitled Tombeau, you have assembled for the first time multiple images of a smaller format rather than creating a single, 1m20 x 1m20 image. How did this come about?

K.Y.: This work was inspired by a recent visit to Rome, where I saw the 17th century tomb of Cardinal Barberini. It was an extraordinarily simple tomb. There were only three words inscribed on it: Pulvis, Cinis et Nihil  - "Dust, Ashes and Nothing". In other words, it spoke only of absence and self effacement. There was no person, no time. It was a tomb made at the height of the Baroque era, yet it was completely anti-Baroque!
I retraced the words that were on the tomb, and then had them made into red blown glass letters in Murano, so that they were the exact size of my face. Using red cloth for the background and red makeup, I then photographed myself lying down, as if I were in a tomb, holding each letter with the muscles of my face.

B.O.: You have recently created works with very Japanese themes, including cherry blossoms and green tea .

K. Y.: I made The Sakura Bride and The Green Tea Bride for an exhibition last spring called Parcours Saint-Germain-des-Près which takes place in various luxury boutiques in Paris. The theme of the show was perfume. These two self-portraits were hung in the windows of the Arthus Bertrand store. I created a perfume especially for the event, called Sakura, which means cherry blossom in Japanese. The images evoke the perfume of cherry blossoms and green tea, two very subtle and sweet smells that all Japanese people know well. My favorite Japanese biscuits are wrapped in the leaves of a cherry tree. The show included a video installation and a transparent table using plexiglass, glass and mirrors as well as silk screens of cherry trees which are evocative of the petals of a cherry blossom falling on a pond. All of these were created by combining ideas and words from a Japan that exists in my imagination.

B.O.: You also have introduced, on the transparent table, a silkscreen of a skull !

K.Y.: For this, I used a colorless ink. It is so colorless, it is about to disappear, like steam on a bathroom mirror. I have called it Steam Self Portrait. Once again, I have mixed elements of European and Zen culture. The skull is symbolic of Western notions of death and vanity, while the cherry tree, in Japanese culture, symbolizes the death of the Samurai. The Samurai is buried at the foot of a cherry tree and his soul is reborn every spring.